Year 7 Graveney student Matilda has received an ‘Outstanding Student’ award for her outstanding contribution to the Burnet News Club, a national network of schools news clubs. The ceremony took place at the Queen's Gallery in Buckingham Palace on 18th June.

Matilda is one of just ten students, selected from more than a thousand, to attend the Burnet News Club’s annual awards ceremony. At the event the students received their awards and some presented examples of their work. Matilda shared a piece she had written likening Brexit to a round of chicken pox. 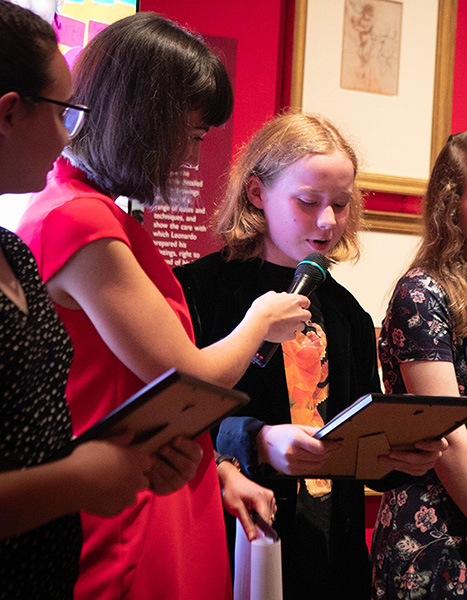 Matilda said: “The Burnet News Club has been really fun this year and really interesting. It’s really fascinating learning about everything and it’s nice to be able to express myself and my opinions about the news.”

The Burnet News Club is run by The Economist Educational Foundation and is delivered by teachers around the UK. It aims to develop young people’s critical thinking and literacy skills through open discussions about current affairs, both in the classroom and online. This academic year students have explored topics ranging from the Rohingya crisis in Myanmar and climate change, to violent crime and Trump’s wall.

Brexit is like a round of chickenpox. Nobody can see it coming, but when it arrives, everyone wants it to be over. Trying to find the cure is like trying to find a deal. Sometimes your system rejects it, and you have to find another. If you become fed up with finding cures, then you just wait for it to be over, without a cure. If you have chickenpox, you cannot do anything until it is solved or you are better. This is like Brexit because the government has put all their efforts into this issue for the last few months, ignoring problems with the NHS, global warming, and other things.

Olivia Platman, Schools Relationship Manager at The Economist Educational Foundation, said “With over 80 schools participating in the Burnet News Club and a very busy club website, selecting outstanding students was no easy feat. The students receiving the award have really impressed us this year. They have taken part in their club at school and have led and developed exceptional online discussions about current affairs using the Burnet News Club skills: reasoning, curiosity, healthy scepticism, storytelling and open-mindedness.”